The Wedding of Ashley & Alex

“Mike Staff Productions was simply amazing. We have always heard planning a wedding is stressful and time consuming. Well Mike Staff made it fun, exciting and 100 times less stressful. They give you the options that you can pick from and they take it from there. Since it was bundled it made the transition smooth. The staff had worked with each other on a regular basis so it was much less coordinating on our part. I recommend them for any event, especially a wedding!” – Ashley & Alex

“You wouldn’t believe this but we met on match.com! One of us showed interest and we began messaging back and forth until we could meet. We had a lot of the same interests but music was the big ice breaker. We dated long distance for over two years when I finally moved in late August 2016.”

“2017, for us, was the year of the weddings! We had eight weddings of close family and friends that we knew we were going to attend, three in which Alex was asked to be a groomsman! The proposal was a shock just because Alex didn’t even plan it!  The first wedding of the year was a destination wedding in New Orleans early May. On the last day we decided to check out some shops. We found this very cool t-shirt shop that carried rock and roll/heavy metal band tees. Since weddings were on the brain while we were shopping we joked around about how cool it would be to plan a rock n roll wedding.  After leaving we walked by this store called “Road Kill” that I had been in a few months prior. I stopped Alex and dragged him inside. They sold all unique clothing anything from lace to leather! Alex immediately fell in love with a jacket high up on the self. As we got assistance we guessed the price was a little more than we would have liked to pay. I convinced him to try it on anyways and what do you know it was a perfect fit. After much deliberation this is how the conversation went.

Alex: “It’s too expensive, but I really want it.”

Ashley: “You should buy it or you will regret it and I’ll hear about it for months.”

Alex staring at jacket in silence. Then looked up at me, then back at the jacket.

Alex: ‘The only way I’m buying this jacket is if you promise me that I can wear it down the aisle and we have that rock and roll wedding.”

Ashley (without hesitation): “I’m okay with that!”

Ashley: “Wait are you serious?”

Alex (glancing at jacket in hesitation): “Yeah, I think so!”

I think I shouted and burst into tears jumping up and down, “OMG I’m getting married!!”

“Alex asks if I would want to pick out my outfit since we were getting his here. I said yes and within the hour we had purchased our wedding attire! We had to rush to the airport with our wedding outfits on our carry-ons and before boarding I couldn’t help but call my mom. Flying home we had so much excitement that we decided that we were going to have fun and make it our own. Alex had a vision of what he would like to do and on our plane ride home we had planned the entire ceremony! Later that week we had booked the venue that was only five months away and it became the ninth wedding of the year for us!! Alex properly proposed two weeks later on his boat at one of our favorite spots in Lake St. Clair. Metallica’s “Nothing Else Matters” was playing in the background with the sun setting when he presented his late grandmothers diamond ring. To me it was beyond perfect.” 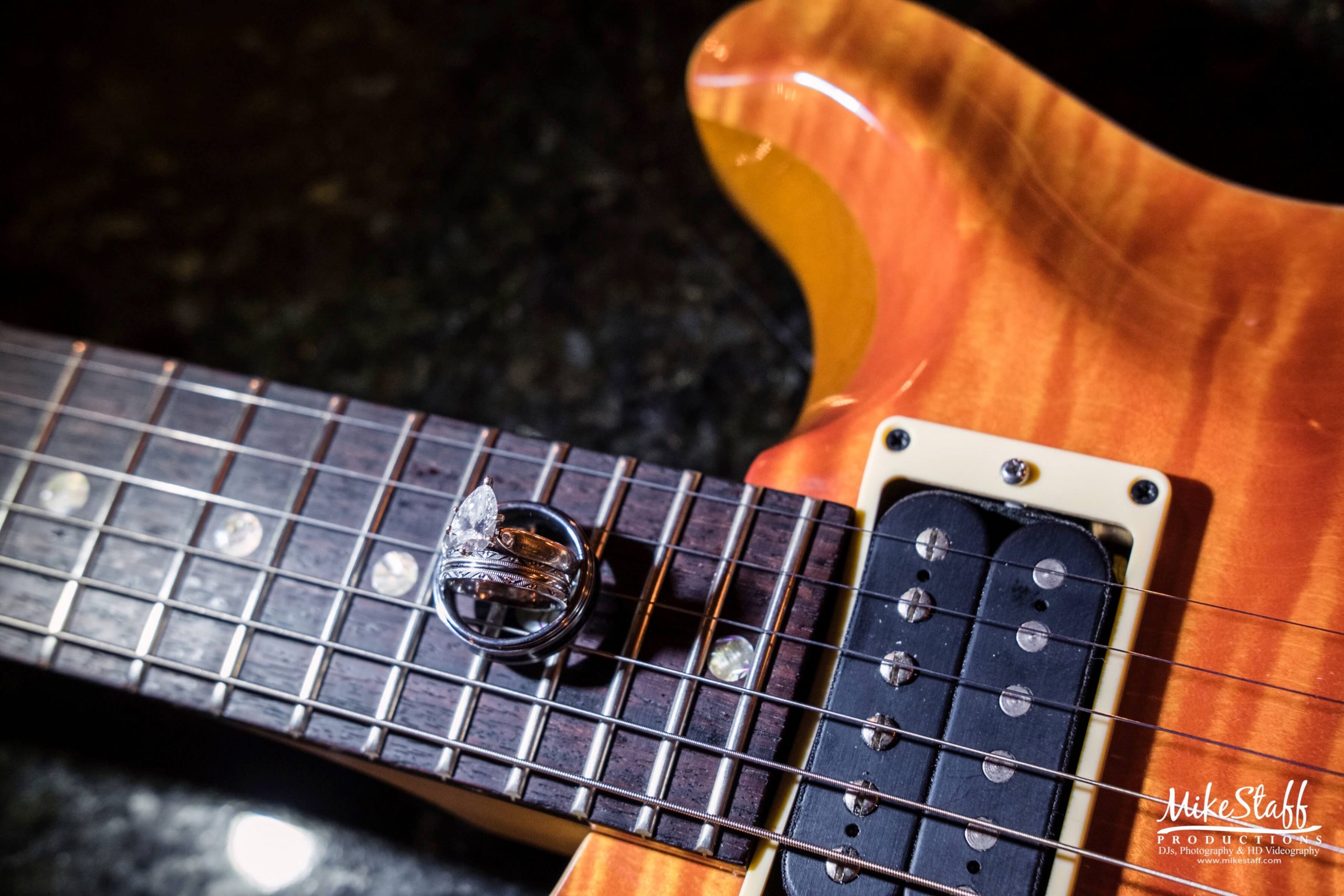 “I think my husband and I were born in the wrong era. We definitely should have been this age in the 80’s with the rock bands, great costumes with leather/studs and big hair. Alex had friends and friends parents who introduced him to artists like Alice Cooper and Judas Priest. While my mom listened to all the classic rock artists. For both of us music is a huge part of our lives and it really mattered what we played at our wedding. Some of our favorites that we listen to daily: Guns and Roses, Iron Maiden, Metallica, Steel Heart, Black Sabbath, Alice Cooper, Motorhead, Megadeth, Van Halen, Def Leppard, Judas Priest and the list goes on! 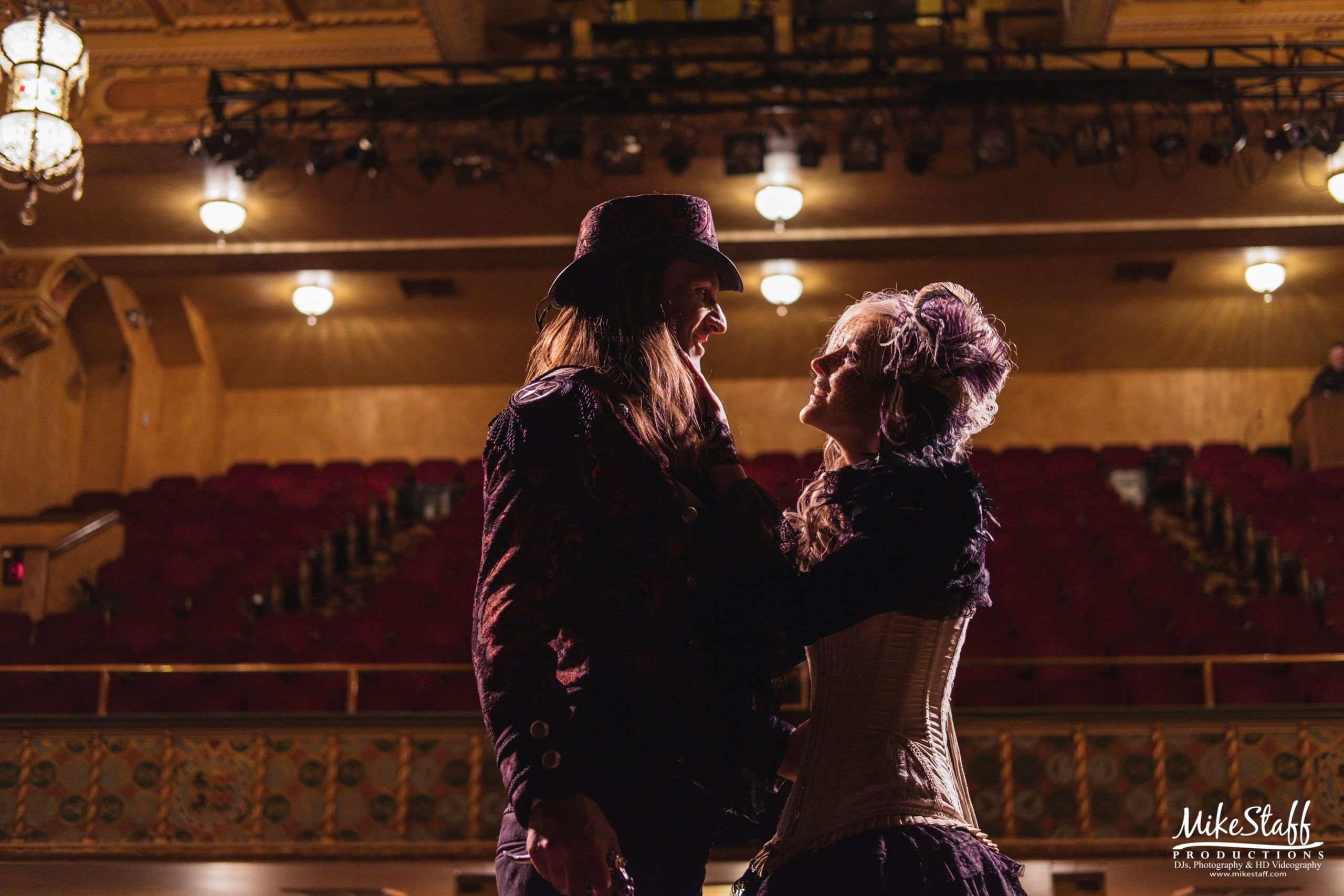 When we decide to do something together we go all in. We are that couple that if you invite us to dress up somewhere show up in full blown costumes. Whether it is somewhere fancy, themed birthday or Halloween we tend to take our outfits to the next level. So when we decided to have a rock and roll wedding we knew we had to make it a spectacle. We definitely didn’t want the typical wedding, not that it’s a bad thing we just wanted to make ours stand out from the rest. Our goal was to have our friends and family have an experience that they have never had at a wedding before. It was close to Halloween so we encourage our guests to dress up in 80s or rock apparel. 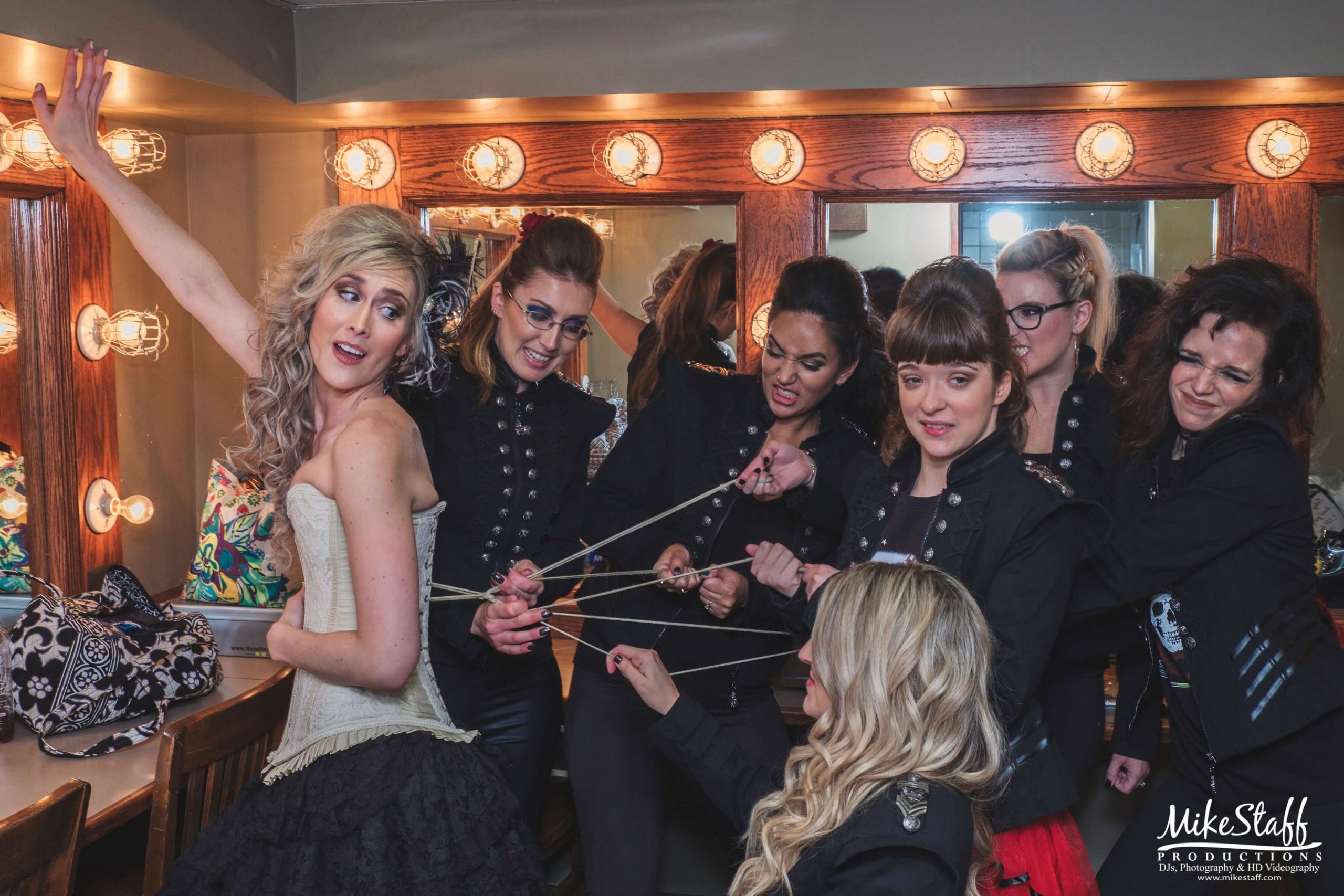 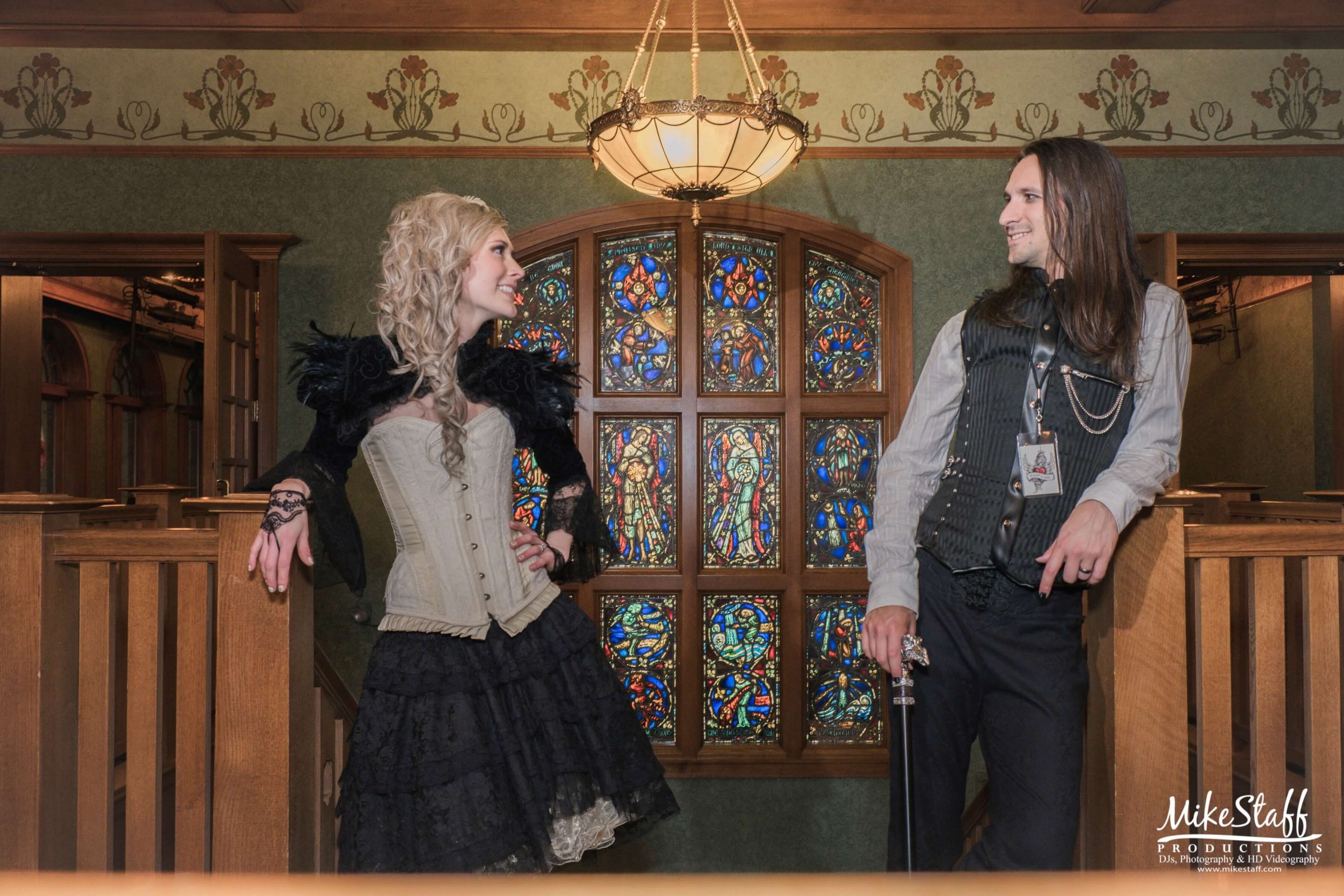 Some details included backstage passes for everyone who came. Each pass coordinated with an album cover that was their seated table number. At the table we had the actual Vinyls for everyone to sign with silver sharpies instead of a guest book. (which we ended up framing and hung them in our basement) We wanted it to look like rock and roll royalty so we went with black table cloths, skull decanters and giant candelabras full of red roses. Everyone received a guitar pick with our names and wedding date on them and we gave skeleton awards out to the best dressed. We purchased a flying V guitar for our wedding party to sign which we proudly display. Lastly, every line of our vows were puns based off song lyrics, song titles, albums or bands which we personalized and made a killer impression on people.”

Ashley: “Its tough to say because I would love to relive that day over and over again. But I guess I would say one of my favorite moments was opening the doors and seeing Alex lip singing on stage “I’ll never let you go” from Steelheart. The crowd was cheering and I really felt like I was marrying a rock star. My second moment would be sitting at the dinner table realizing all the small details we threw together in five  months all worked out and realizing that working together we have achieved one of the greatest moments of our lives. 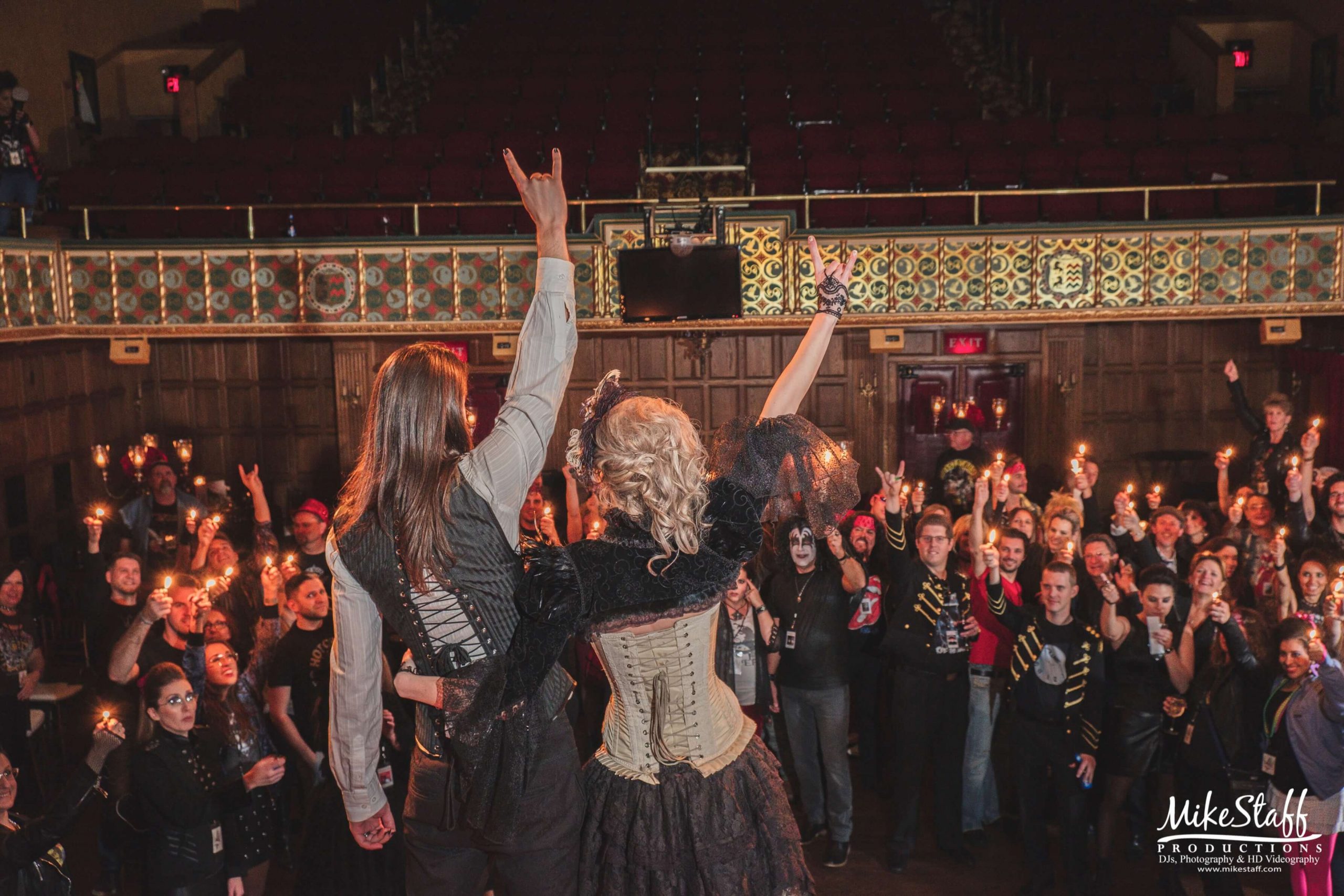 Alex: I’m sure Ashley will kick me for this one, but my favorite moment of the day was when the theater went from pitch black to spotlight on the stage and I walked out with Ozzy Osbourne’s Mr. Crowley playing. The crowd was cheering and I felt like the conductor of some great theatrical performance that we (bridal party/bride) were about to put on for our guests. We had less than five months to plan this wedding and despite what others had warned us, every small detail went exactly according to plan. 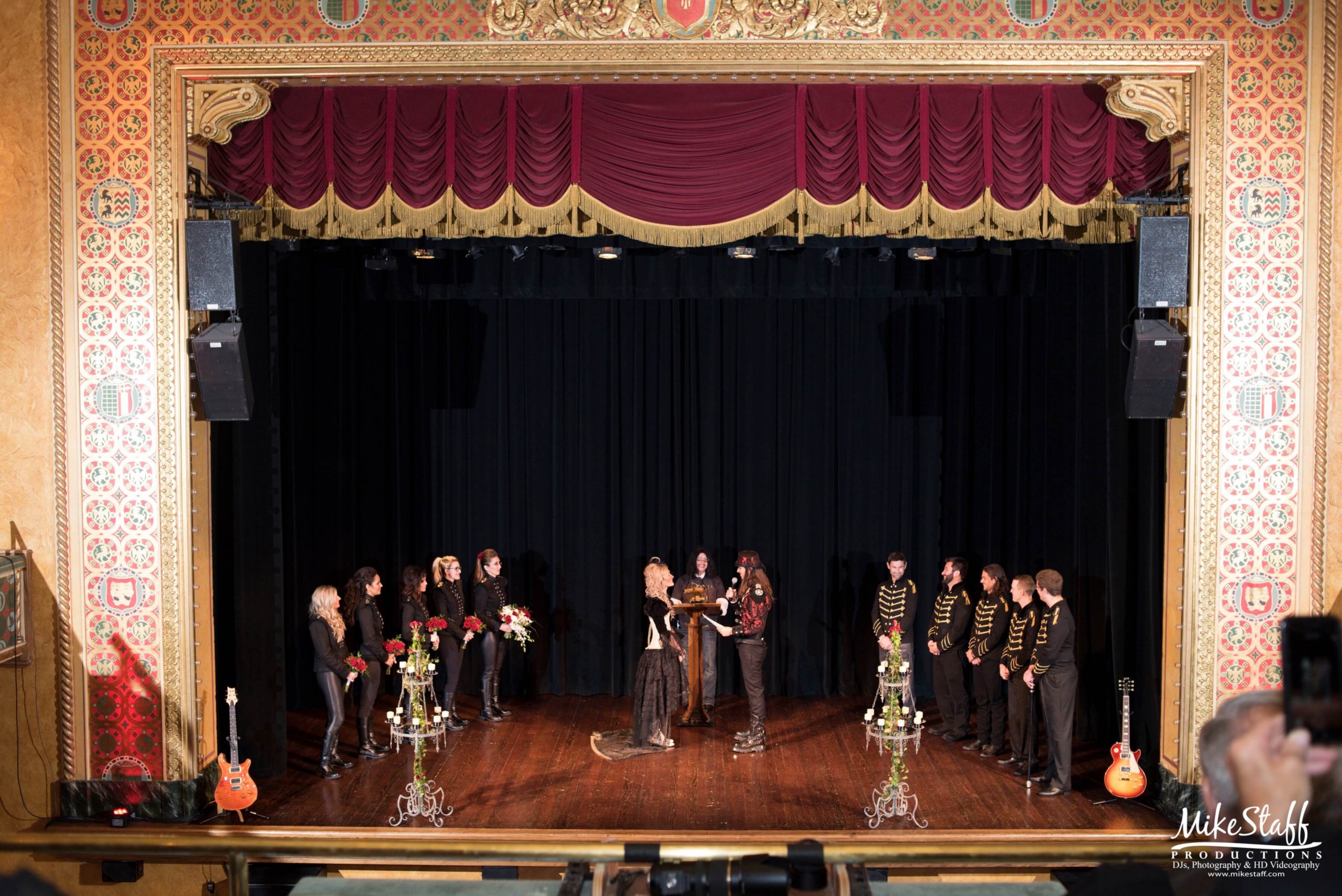 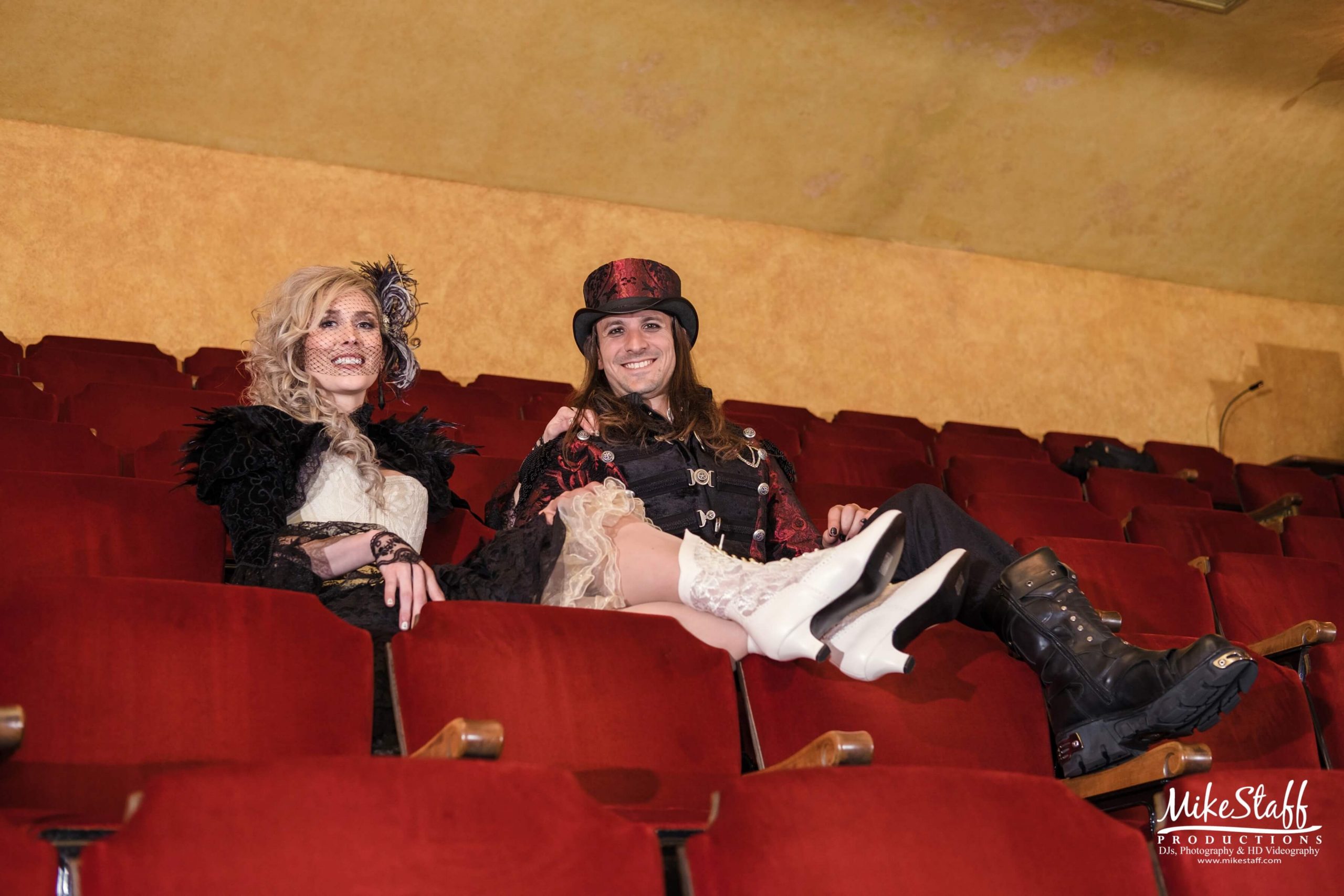 Alex: “We played Strange World from Iron Maiden’s first album. The song certainly wasn’t chosen for the lyrics but more of the melody and its structure. The song contains two beautiful solos that we had two groomsmen play with their electric guitars. The intensity of the solos provided a great melody for executing a timed dance. We never took dancing lessons but I had a vision and we googled some formal dance videos. We practiced for weeks and luckily nailed it at the wedding. The Metallica song Nothing Else Matters was an additional song Ashley wanted to add for a “second dance” including the bridal party because it was more lyrically how we felt about each other.” 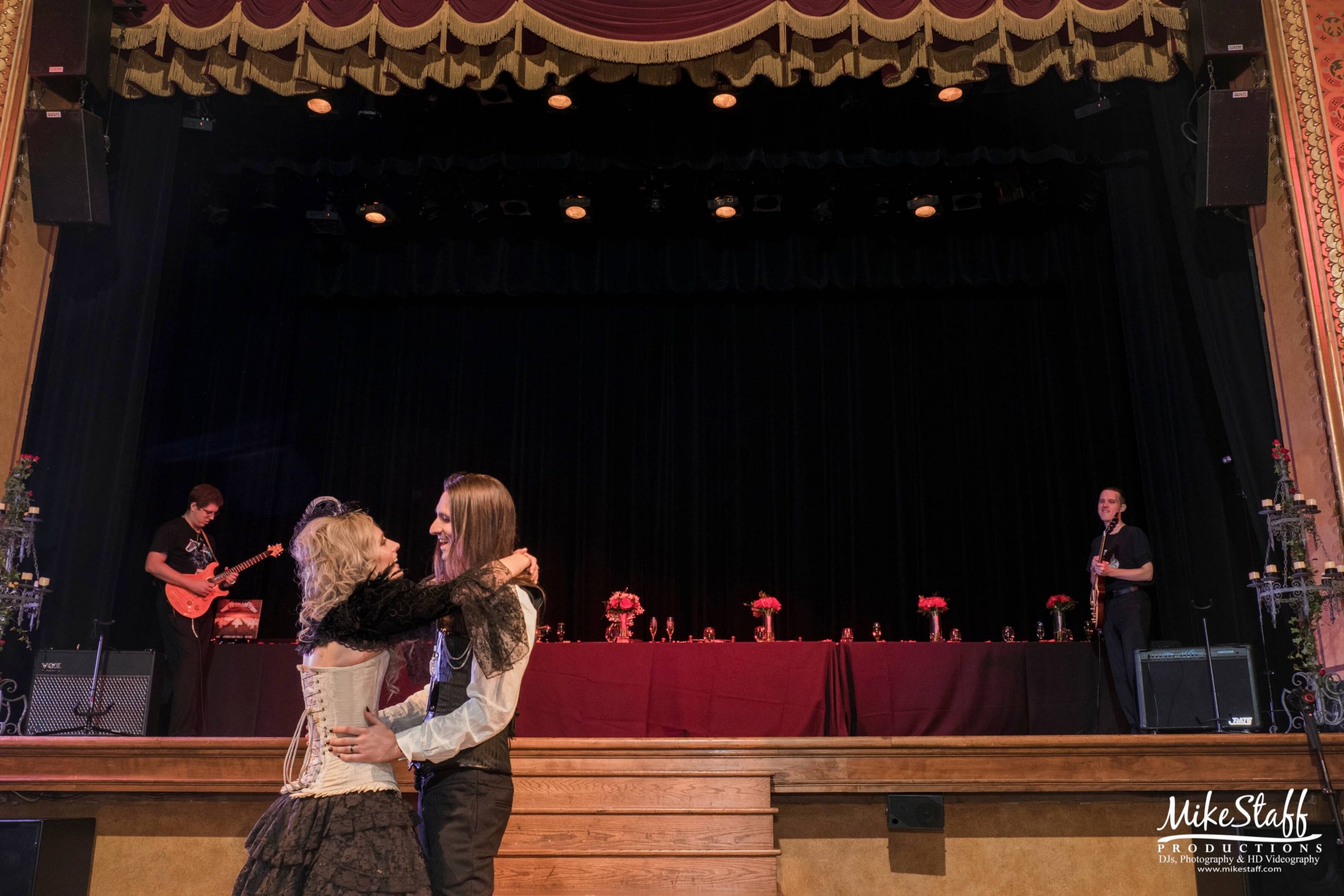 Ashley: “First off, we can’t say enough good things about Mike Staff Productions. They made the process for picking the best person for the job so easy! Since we were such a unique venue we needed someone we could trust to create that atmosphere we were envisioning. Kevin our Mike Staff DJ did just that. We relied heavily on his knowledge of music and how to keep the party going. He executed our day perfectly with all our demands of the day and was able to execute it flawlessly. Everything had to be perfectly timed as stage lights went on and off, as well as when certain bridal party members entered the stage. Kevin executed it flawlessly. Music was the biggest key to our wedding and could have easily ruined the day if the communication was not clear. Our DJ took the time and effort to nail it and it is everything we could have asked for!

Ashley: “When you try to describe to people the type of wedding you created, it doesn’t do it justice without the visual. The video does just that. It captures things that we might have missed or forgotten. With the big day there’s a lot of factors and you get pulled in every direction. With the video, it gives us a chance to slow that day down and relive it over and over again. I definitely tear up every time I watch it. Reminds me of all the hurtles in relationships you go through to get that moment. That moment when you want to spend the rest of your life with someone just as heavy metal as you are!”

Ashley: “Again Mike staff hits it out of the park with the level of professionalism and execution of their staff. Justin was our main photographer. He spent the time and energy to listen to our specifics and what we were looking for. He spent hours going over the day and creating visuals that were absolutely stunning. His creativity, enthusiasm and direction helped us capture the most perfect day. Without his keen sense of visuals, I am sure the photos would not have turned out as breath taking as they did. As an artist myself and having knowledge of photography, I felt that I couldn’t just let anyone take our photos. I wanted someone to capture every detail and his images were even better than I could ever imagine. He left me speechless in many of the shots he took.”

Ashley: “The wedding album came with our package. Let me say I have so many compliments on the quality and layout of the album! We wanted it because it is something we can quickly grab at home while telling people about our wedding and having a beautiful display without much effort. I just love skimming through it on a weekly basis because it’s a great reminder of the big day.”

Don’t trust your wedding to anyone else. Mike Staff Productions would be honored to bring your vision to life. Let’s get started!